To Write Love on Her Arms (TWLOHA) started as the title of a story one friend wrote for another as she entered rehab. Now the writer of that story, Jamie Tworkowski, is the founder and creative director of the non-profit organization TWLOHA, which works to provide hope and resources for those struggling with mental health disorders and/or substance abuse. Through a variety of programs including speakers who visit high schools, colleges and universities, support groups at colleges and universities called UChapters and resources available on their website, the organization reaches out to young people in particular, but aims to prevent suicide and break down the stigma surrounding mental health and substance abuse.

Tworkowski will speak tonight, Oct. 2 at 7 p.m. in the SURC Ballroom. Attendance is free and open to the community. Seattle based singer-songwriter Noah Gundersen, an up-and-comer in the indie music scene whose music has been featured on the hit television shows “Sons of Anarchy” and “The Vampire Diaries,” will also join in the evening. TWLOHA is known for partnering with musicians from Switchfoot to Katy Perry, because as Tworkowski said, “music is so honest, and we want people to feel like they can be honest.” 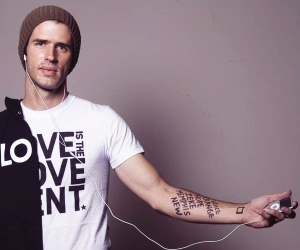 When I interviewed Tworkowski for a story I wrote for the Daily Record to promote the event, there were two things about him that struck me most. Yes, he and Christopher Foley from “Scandal” do bear a striking resemblance, but that’s neither here nor there. What really interested me about Tworkowski was, first of all, the amount of passion he has for helping others find hope, and secondly, the fact that he started TWLOHA in 2006 when he was only 26. I definitely don’t want to say that older people can’t be effective in helping college-age people fight mental health disorders or substance abuse, but knowing that Tworkowski and the TWLOHA staff, fifteen professionals and between six and seven interns, are all young makes a difference. They’re on our playing field, and they know what it’s like to be a young person in 2014.

Campus Activities is hosting the event, so I also interviewed Campus Activities director Scott Drummond. He told me that part of the reason he and his staff sought out TWLOHA was the “young factor” of their team.

Everyone is invited to attend tonight, so whether you’re a sophomore in high school or a senior at CWU, Tworkowski is sure to not only address what you or someone you know may be going through, but more importantly, have sympathy for what going through depression, anxiety or a drug dependency is like. He told me that the main goal of the event is to let people know that they’re not alone, and for the audience to leave feeling encouraged.

“The most amazing thing has been getting to experience meeting people and hearing them say that they’re still alive because of the work we do. It’s hard to imagine receiving something more significant than that,” Tworkowski said. “We’ve learned that so many people live with these issues but don’t talk about them, and this gives people permission to be part of a conversation that continues on.”

For more information on TWLOHA, visit their website at www.twloha.com.