If you didn’t know, Ayron Jones and The Way is a heavy rock trio that literally drips with pure talent. The energy, sound and emotion that these three guys can create will have you swearing that there’s at least nine people on stage. Their music sounds like a mixture between the heavy vocals of Seven Mary Three, with the masterful guitar work of Jimmy Hendrix and the technical drumming prowess of Dream Theatre or Avenged Sevenfold with the late Jimmy “The Rev” Sullivan.

I can’t oversell how much talent Ayron Jones and The Way has. It’s not possible. They were here last year, and while only about 30 students showed up to check out their FREE show (okay, it was the Friday before Mother’s Day, but still) they were treated to one of the best live shows Ellensburg has ever seen. Yeah, I know Macklemore was here before he took off, and I’m aware we had Phillips Phillips but honestly, I would put Ayron Jones up there with some of the greats of rock ‘n’ roll.

Look at this video. He’s playing the guitar with a drum stick. WITH A DRUM STICK.

For more information, check out the calendar listing here. 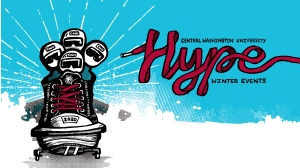 Submit your ideas for CWU’s next construction priorities. Visit cwu.edu/capital to view, comment, vote on and submit recommendations for future capital and non-capital projects at CWU.

Wildcats, take time to fill out your anonymous instruction evaluations this quarter! Feedback is important to your instructors and helps them develop class curriculum and more.

Spring Quarter Registration
Registration is Feb. 18 – March 13. Prepare by meeting with your advisor, checking for holds on your account and mapping out your ideal schedule.