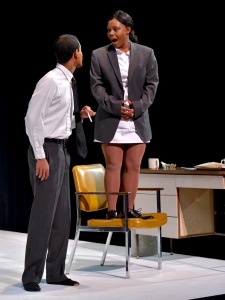 The stage is set; one bed in the center, one desk off to the side with one chair loosely pulled away from it. One waste bin sits next to the desk with just enough paper crumpled inside adjacent to the nightstand with one telephone (the real kind, cord and all) perfectly placed to look casual and reminiscent of a 1960s motel.

Off-stage are the primary players, nervously waiting for their cues but ready and prepared to make their mark. One man, one woman, one powerful show ready to tell the audience an imaginative story of a man who was a driving force behind the civil rights movement. 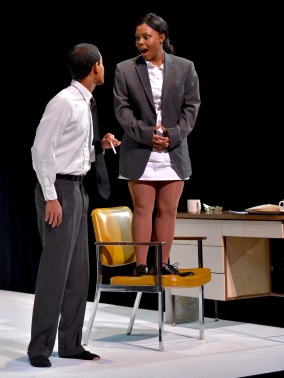 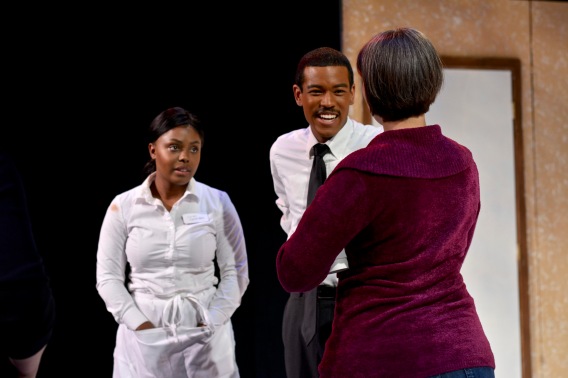 CWU’s take on the play “The Mountaintop“, which highlights a fictional idea of Martin Luther King Jr.’s last night before his assassination, opened in the McConnell Tower Theatre on Friday at 7:30 p.m.

The original play premiered in London in 2009, pulling in astonishing reviews and sold out shows which ultimately led to the widespread production of the show.

The entirety of the play is set in the hours just prior to King’s assassination on April 4, 1968 on the balcony of the Lorraine Motel in Memphis, Tennessee. The motel room, number 306, and the dialogue between King and fictional maid, Camae, serves as the basis of the single act play with no set changes or additional characters.

Although the role is a mighty one to fill, you’d never notice the nerves and first night jitters coming from Hiko Addison, who plays King. That is, if he didn’t tell you.

“I was so nervous I could barely hold the cigarette,” Addison said of an early scene after the final dress rehearsal.

Throughout the play Addison shares the stage with fellow CWU student Jaeana Davis, who plays the energetic and mysterious Camae. Though her character’s views differ somewhat from King’s, the contrast on stage brings forth some visible conflict and allows insight into King’s personal life outside of the public eye.

Going into the play, knowing the premise behind it and the message(s) that you will likely pull from it, to simply call it “powerful” and “moving” can’t even begin to justify the emotion these two exude on stage together.

Without giving too much away, all I can say is, go see it while you can. Brave the cold and the snow. Embrace the history of the civil rights movement and the story being told here this weekend.

The words, the images, the feeling of it all (especially the final moments of King on stage) will stick with you through the rest of the night, if not the remainder of the weekend.