As a senior in college, job hunting can already be stressful enough. Writing resumes, cover letters and attending interviews can all be nerve recking. Now the thing many people of color don’t mention is the additional factors that create difficulty when looking for jobs.

As a Latinx journalist, I want to make sure that I will end up in a work environment where I am respected, valued, and appreciated. I identify myself as a person of color, therefore I don’t solemnly just apply for a job…I have to research demographics in the town, demographics in that work place and most importantly critically analyze that I won’t be placed in an all-white staff and be considered a company’s “diversity card”. In essence, my work will be where I spend a large amount of time. I have to make sure that my voice will be heard and put into action.

I have to research demographics in the town, demographics in that work place and most importantly critically analyze that I won’t be placed in an all-white staff and be considered a company’s “diversity card.”

Learning how to speak up when I talk

It was only after having the opportunity to interview Ijeoma Oluo, this year’s Diversity Awards’ keynote speaker, that I was able to express this topic. Oluo understands that talking about race can be difficult, especially in a predominantly white environment. To help this, Oluo wrote her New York Times best-selling book, “So You Want to Talk About Race.”

She told me, “Your whole life you will have conversations about race,” and she’s right! When I have interviews I have to ask about diversity in the workplace. I have to take these additional steps to find out if the company is the right fit for me. I realized that I shouldn’t be scared to talk about race, and if a company doesn’t feel comfortable bringing up these issues, then they are not a company I want to work for.

“We need to recognize that race is in the foundation of this country and it is in all of our institutions,” says Oluo. Whether it be school, work, sports etc… we are all built to live in institutions that hold barriers for the non-privileged. It’s only when we talk about these issues that we are able to implement change.

“Your whole life you will have conversations about race.”

Examining the environment around us

“You need to be examining those situations, and saying why do I think race is crucial here. Where can I find where there might be bias in a situation here, or a situation where I can make the situation more just. Look for that and do the work there,” says Oluo.

As a journalist, my voice is my most valued possession. I am able to convey messages through my writings and reporting. The journalism world is a lot more critical then people would think. People in the industry will try to fit journalists into a box, from the way they look to the way they write.

“My career would be nothing without my authenticity,” she continued to say, “but I know that what has been denied [for] people of color in pop culture and in our journalism and in our news, is our authentic voice.”

“My career would be nothing without my authenticity.”

She made me realize that I have a whole other perspective when it comes to journalism, I get to write from my minority viewpoint. I bring so much to the table and therefore I should be valued just as much as anybody else in my work environment.

I’m excited to hear what else Ijeoma Oluo will have to say at the Diversity Awards on May 8th.  She was named as one of the “Most Influential People in Seattle” by Seattle Magazine. Her work focuses on race, identity, social justice, feminism, social and mental health and has been featured in The Washington Post, NBC News, Elle Magazine, TIME, and the Guardian. In the short conversation we had, I learned so much from her. 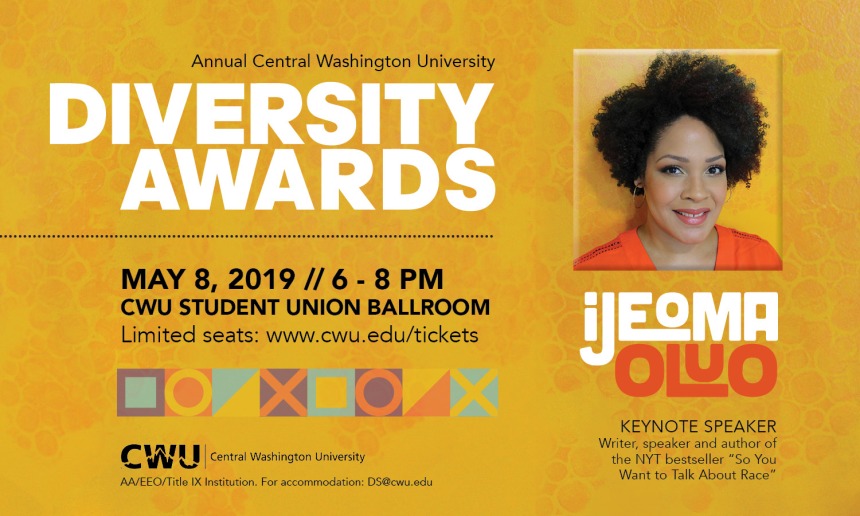 If you would like to have a personal conversation with Oluo, you are in luck!! She will have a public book signing and meet and greet in the SURC Ballroom after the Diversity Awards at 8 p.m. Her book,  “So You Want to Talk About Race,” will be available for purchase courtesy of the CWU Wildcat Shop. Hope to see you there!